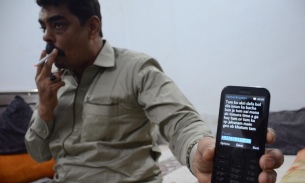 As 2016 gets going, I thought I’d share links to some of the pieces I most enjoyed working on last year. In no particular order, here’s my top 5:

In my debut piece for the Guardian’s fantastic new long-reads section, I profiled a crime reporter in Karachi, often cited as one of the world’s most dangerous cities.

2. Naz Shah interview: “the victory is my mother’s, too” (New Statesman)

One of the stand-out stories of the May general election was the victory of Naz Shah, who defeated George Galloway in Bradford West. I went to Bradford to speak to Shah soon after the election and hear more about her extraordinary life story.

3. A deadly battle of ideas: murder in Bangladesh (New Humanist/Guardian)

In the cover story from the autumn New Humanist, I wrote about the spate of brutal murders of atheist writers, interviewing two survivors of these attacks and exploring the historical factors behind the violence. A shorter version of the piece also appeared in the Guardian.

Since the 2011 uprising, Egypt’s political system has gone through a series of convulsions, leaving many different groups of people vulnerable to state repression. I interviewed Mohamed Soltan, an Egyptian-American arrested in Cairo after protesting. He spoke graphically about the torture he endured, and discussed his current campaigning.

As soon as I came across a collection of Taliban poetry in translation earlier this year, I was fascinated with the idea of hardened militants sitting around and composing verses. This online piece for the New Statesman discusses the growing body of scholarship around the non-violent activities of jihadists and what we can learn from it.

This is just a small selection of the work I did this year; if you scroll down, you can see a sample of my other reporting. I’ve got some really exciting projects coming up in 2016, which I’ll be sharing details of in due course. Happy new year!