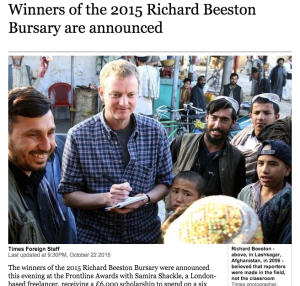 I’m thrilled to have been awarded the 2015 Richard Beeston Bursary. Set up last year, the award is for a young British journalist to spend six weeks abroad, researching and reporting on a foreign news story for the Times newspaper. The bursary was set up to further the legacy of Richard Beeston, the distinguished and much-loved foreign editor of the Times, who passed away in 2013. As the Times’ report on the bursary award this year says:

Richard Beeston, known as “Rick”, was a much-admired foreign editor of The Times from 2008 until his death, aged 50, in 2013. He was passionate about encouraging correspondents at the beginning of their careers and the bursary set up in his name addresses his belief that reporters are made in the field – not the classroom.

His own career began aged 21 when he moved to Beirut during the civil war to work for The Daily Star. He was forced to move back to London after a series of kidnappings of foreign journalists and joinedThe Times in 1986. Rick earned the reputation of being the “fireman” on the foreign desk – the reporter sent to war zones and natural disaster areas at a moment’s notice.

More information on the award, and on the project I plan to report on, can be found at the Richard Beeston Bursary’s website. I’ll be posting links to my stories when I start reporting, probably early next year.