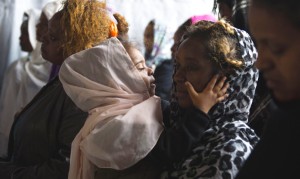 Time to share some links to recent pieces from various corners of the internet.

One of the subjects I’ve recently been most interested in – along with many other journalists – is the terrible refugee crisis at Europe’s borders. I wrote this opinion essay for the New Statesman, asking how we reached a situation where we treat refugees so badly:

This is political and media environment which has habitually cast asylum seekers, refugees, migrants, not as people worthy of help – not as people at all – but as a threat to “our way of life”, to our scant resources, a “swarm” seeking to overwhelm our borders. It is not just the scale of the current crisis, but two decades of dysfunctional asylum policy that has left the UK (and other western countries) so poorly placed to respond.

I also wrote this report for new online women’s publication, The Pool, about women in the camps in Calais and the specific set of problems they face.

Everyone at Calais lives in dire conditions, but female migrants have a specific set of needs. Those who do not have access to the beds at the Jules Ferry Centre are sleeping in tents and, like the others camped there, do not have access to basic sanitation. Megan Saliu, a UK-based activist, set up the fund-raising campaign Supporting Sisters in Calais, to address some of these needs. “Our main concern is getting sanitary pads and basic toiletries out to the women, as well as nappies and wet wipes. But we are also taking useful supplies for men,” she says. “It’s a humanitarian crisis on our doorsteps. These people are stuck. They can’t go back.”

And I reported on the political response for the German outlet Deutsche Welle, where I’m an online correspondent.

The British government’s new immigration bill will introduce a package of measures designed to create a “hostile environment” for undocumented migrants. When it comes into effect in the autumn, the new bill will create the offense of illegal working , which will carry a six-month jail sentence and an unlimited fine. New powers will allow the authorities to temporarily shut down businesses suspected of employing illegal migrants. It also means that the trading licenses could be removed from takeaway shops, pubs and off-licenses, which consistently fail to comply with immigration rules.

I’m a new columnist for the International Business Times, kicking off with this piece on ethnic diversity in parliament, and this on the murders of atheist bloggers in Bangladesh (a topic I’ve covered in more depth elsewhere).

I’ve written numerous other reports on UK politics for Deutsche Welle. A full archive of my pieces can be found here. Some recent topics include the Labour Party conference; Jeremy Corbyn’s victory in the Labour leadership race; the political crisis in Northern Ireland; arguments over abolishing the monarchy; and the case against Julian Assange.