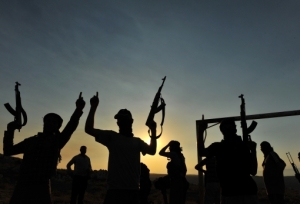 Thought I’d pull together a few links to things I’ve been writing recently.

What is it like to be a Somali refugee in Kenya?

This report drew on interviews I did in Nairobi last year with Somali refugees living through a government crackdown in Kenya.

Is teaching a counter-terrorism curriculum the best way to stop young people being radicalised?

A Muslim community organisation is launching a textbook that uses doctrine to argue against terrorism. Will it help?

Sexual violence in conflict is a complicated and multifaceted issue. It’s important we discuss it, but some of the coverage has bordered on prurient. I spoke to a women’s rights activist who has been on the ground.

There is a growing body of scholarship that explores the non-military activities of jihadist groups. I explored the arguments for why this matters. I appeared on BBC Scotland on 26 July to discuss this.

As the nominations were finalised, I wrote a piece for Deutsche Welle explaining the issues at stake. (The issues seem rather different today, in the wake of Jeremy Corbyn’s unexpectedly successful campaign!)

How will events in Greece impact the forthcoming British referendum? I spoke to experts to find out.

Does the British press have it in for Germany?

People in Germany feel they are being painted as the villains of Europe during the euro crisis. Are they right to be concerned?

I wrote about the British government’s hard line on refugees and migrants, and why this might not be the best approach.