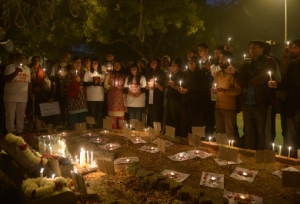 Back in October, I travelled to Delhi. While I was there, I spoke to various women about how safe they feel in the city, and to activists about the long fight for change. It has been two years since the brutal gang rape of a student on a Delhi bus caused national and international outrage, prompted city-wide protests, and a series of legal changes. But did the incident have any lasting impact?

Sexual violence and violence against women is a global problem, and many of the issues that Indian campaigners describe are common to countries all over the world: a lack of funding for crisis centres and counselling, police refusing to record cases or making victims feel uncomfortable, a lack of female officers. “The police are generally very harsh,” says Dorothy Kamal, a rape counsellor for CSR. “People are afraid of them.” India’s police forces are chronically overstretched; and misogynistic social norms still dominate, for all the current public discussion. “Recognising the problem is positive, but when it comes to solutions, we are still grasping in the dark,” says Kumar.

You can read the rest of the article at the New Statesman website.