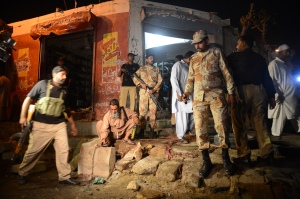 Security officials at the site of an explosion near a Shia place of worship in Karachi, 21 November.

It has been a little while since I updated this site, so here are links to some of the things I’ve been writing for various publications.

A bad few weeks for girls’ schools in Pakistan

At the start of this month, a school in Lahore was burned down by an angry mob after a teacher was accused of blasphemy. This blog looks at the underlying issues of blasphemy laws and the extreme sensitivity of religious issues in Pakistan.

Acid attacks in Pakistan: a sorry litany of male egotism

Anusha, a 15 year old girl in Pakistan-administered Kashmir, died after her parents threw acid on her as punishment for looking at a boy. In the aftermath of this attack, I published this interview with Sharmeen Obaid-Chinoy, the director of Saving Face, the Oscar-winning documentary about acid violence.

Armed guards, metal detectors, and no phone signal: the realities of living under high terror alert

Tens of thousands of people in Pakistan have been killed in terrorist attacks since 2001. This blog reflects on day to day life in what is supposedly one of the world’s most dangerous places.

Pakistan faces violence in a supposed time of peace

This month is the holy month of Muharram, yet it has been marked not by religious reverence but by the heightened threat of sectarian violence against Shias. This piece looks at the recent history of persecution of Shias by militant groups.

I’ve got a piece in the current issue of Grazia (not online) about acid attacks. It looks in more detail at the story of Anusha, the 15 year old killed by her parents.